Biobased polymers are made from biobased resources though in practice biobased resource content may vary [1]. Biomass used for the production of bioplastics may either be extracted directly from plants (starch, cellulose) or produced by microorganisms in fermentative processes (e.g. polyhydroxyalkanoates (PHA)). Biomass can either be from 1st generation feedstock (e.g. corn, sugar cane) or from non-food crops (2nd generation feedstock, e.g. lignocellulosic material). Biobased polymers can also be produced by further chemical modifications and are not necessarily biodegradable. 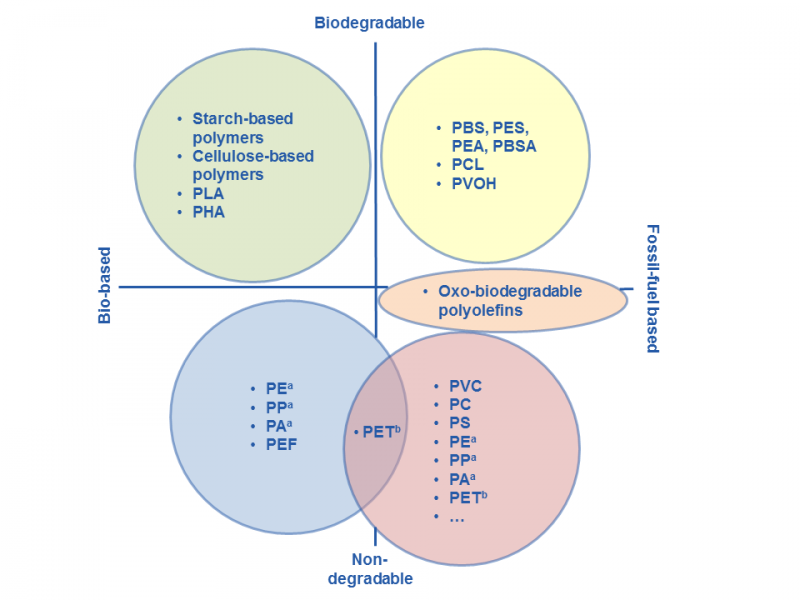 Biodegradable plastics may be made from both natural and fossil resources and are biodegraded by microorganisms in their natural environment. The products of this process are energy, biomass, water and carbon dioxide or methane, depending of the presence or absence of oxygen. If biodegradable plastics are degraded in accordance with standards for compostability, e.g. the European standard EN 13432, they may be labeled compostable.

Bio-nanocomposites are biopolymers which have been stabilized using nanoparticles [2]. The nanoparticles enhance technical properties, such as barrier, thermal, chemical or mechanical stability and include nanoclays and nanosilver [3]. The following bioplastics, which are to a varying degree biobased and biodegradable, are relevant for FCMs (Figure 1) [4]:

Usually pure biodegradable plastics do not perform as well as conventional plastics. Material properties are enhanced by the addition of chemicals including antioxidants, light and UV stabilizers, releasing agents, cross-linking agents and many others.

The monomers of cellulose- and starch based polymers as well as those of PHB and PLA are judged to be of no health concern [5, 6]. This stands in contrast to the toxicological properties of many other monomers used in plastics packaging materials (e.g. bisphenol A (BPA), bisphenol S (BPS), vinyl chloride and acrylamide). However, more additives are usually used in bioplastics than in conventional plastics. The different physicochemical properties of biobased FCMs may result in higher or lower migration rates of additives. Pure bioplastics are usually less stable and have a lower diffusion barrier than conventional plastics. Migration from PLA and starch-based polymers was reported to be low [3, 5, 7]. From oxo-biodegradable plastics, degradation aids are a further source of chemical migrants, in addition to other additives. In their 2011 publication, Ammala and colleagues provide an overview of commercial and potential degradation aids, including benzophenones and di-thiocarbamates [8]. Regarding bio-nanocomposites, 3 of 4 studies showed cytotoxic effects of nanoclays [9-12]. However, these studies do not allow for a conclusion on the toxic potential of bio-nanocomposites due to the great variation among nanomaterials, even those derived from the same batch, and a lack of standardized testing conditions.

Bioplastics covers approximately 1% of the global plastics demand according to the European Bioplastics association and Plastics Europe. In 2007, starch had 50% of the market share of bioplastics, followed closely by PLAs [4]. Applications of bioplastics are distributed as shown in Figure 2 [13]. 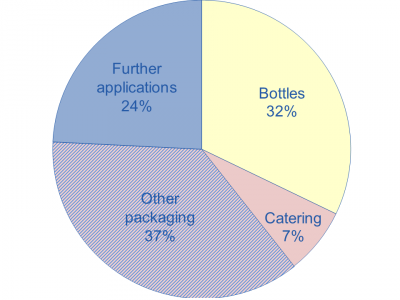 While currently only 0.01% of arable land mass is used for cultivation of raw materials used for bioplastics, the substitution of all plastics with bioplastics would require the use of 7% of the globally arable land. Plastics Europe and European Bioplastics suggest the use of sustainability certification schemes to ensure sustainable sourcing. Opponents have argued that the cultivation of crops for bioplastics requires very intensive farming including the use of fertilizers, pesticides, high water usage and possibly genetically modified plants considered inconsistent with sustainable agriculture.

Various labels are available to certify a bioplastic product. Labels certify a material’s potential of biodegradability or compostability under the conditions defined in the corresponding standards. As landfills used for garbage disposal usually provide anaerobic conditions many biological processes required for decomposition are prevented. Another concern expressed regarding biodegradable plastics is the potential accumulation of metabolites in industrial composting facilities. The testing of the final compost for heavy metals and other toxic chemicals is required, but may be difficult and expensive.

The use of Life Cycle Assessment (LCA) to evaluate the environmental impact of packaging materials, including bioplastics, has provided highly variable results, as a result of the variety of criteria and assumptions applied. Generally, it is important to consider as many environmental impact categories as possible when choosing an alternative material using LCA. Usually, bioplastics score lower in energy and carbon dioxide equivalents, but have a higher eutrophication potential. Under standard LCA methods, chemical migration and subsequent human health effects during the actual use phase are currently not considered.

In Europe, bioplastics are regulated under Commission Regulation EC 10/2011 and substances used in the manufacturing of bioplastics must be listed on Annex I of the regulation. Regenerated cellulose films are specifically regulated under Commission Directive 2007/42/EC. Substances used in nanoform require an explicit authorization according to article 9, EC 10/2011. Currently carbon black, titanium nitride and silicon dioxide are authorized as nanoparticles for use in plastic FCMs. Under US food contact law, bioplastics are regulated in the same manner as other indirect food contact materials (see also FPF article on FCM regulation). The US food law does not yet distinguish in its authorizations between the nano- or macroform of a substance. However, the use of nanoclay in food contact is considered generally recognized as safe (GRAS) in the US.

In addition to regulation, standards on compostability, biodegradability and the determination of the biobased carbon content exist. Certification organizations like DIN CERTCO, Vincotte, Bioderadable Products Institute and Japan BioPlastics Association verify claims regarding the biodegradability or compostability and allow the labeling with the respective logo, including the “seedling” logo, “OK compost” and other logos specifying the percentage of biobased content.