People are exposed to hundreds of chemicals every day. More than 85,000 chemicals are used in consumer products (Goldman and Koduru 2000) and more than 6,000 chemicals are known to be used in food contact materials (Oldring et al. 2013). If exposure is not adequately controlled, chemicals may cause harm to exposed populations. Health effects can range from mild eye irritation and nausea to serious chronic disease like cancer. In order to control chemical exposure, chemical risk assessments are carried out. Chemical risk assessment is the quantification of the risk for health damage occurring in a population due to chemical exposure. The basic approach to quantifying risk follows the following formula: 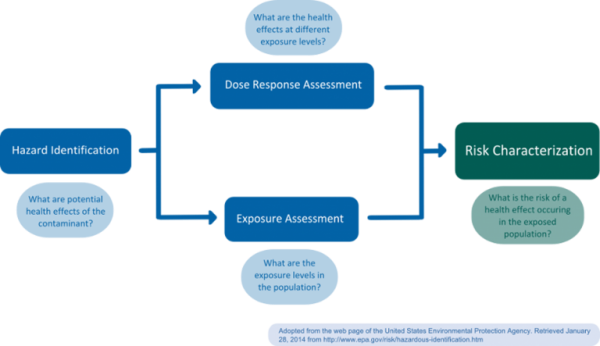 Risk assessment should be clearly distinguished from risk management, which is a normative process carried out by regulators; in risk management, socio-economic or political considerations are taken into account and weighed against risk estimates. Subsequently, necessary control and prevention measures are initiated. Generally, risk assessment is considered a science-based process consisting of four steps: a) Hazard identification, b) dose-response assessment (or: hazard quantification, hazard characterization), c) exposure assessment, and d) risk assessment (or: risk characterization) (Figure 1) (NRC 1983).

During hazard identification, the potential hazard posed by a chemical is identified. Typical information required for identification of hazardous chemicals includes data on toxicokinetics (absorption, distribution, metabolism and elimination (ADME)) and the interaction of a chemical with a biological target (toxicodynamics, f.e. Quantitative Structure-Activity Relationships (QSARs)) (EPA 2014). Alternative sources of information are accidents and measured residue levels in biota (van Leeuwen and Vermeire 2007).

The goal of dose-response assessment is to describe the relationship between different degrees of exposure (dose) to a substance identified as a potential hazard, and incidence and severity of an effect on the organism, usually focusing on the most sensitive endpoint (van Leeuwen and Vermeire 2007). Dose-response assessments are usually based on toxicological in vivo studies, though in vitro, in silico, or epidemiological studies may also be employed. In vivo studies for regulatory risk assessment are usually carried out in accordance with guidelines established by the Organisation for Economic Co-operation and Development (OECD), following good laboratory practice (GLP). As a result of the dose-response assessment, a tolerable daily intake (TDI or Reference Dose (RfD) in the U.S.) for the human population of interest is established. For non-carcinogens, the TDI or RfD corresponds to an exposure level at which no adverse health effect would be expected (safe dose). To extrapolate from the animal study to the human population, the no-observed (adverse) effect level (NOEL or NOAEL, level where no effect was observed in an animal study) is usually divided by a safety factor of 100 (van Leeuwen and Vermeire 2007). In cases were a NOEL is not available, statistical lower bounds such as the Benchmark Dose Level (BMDL) may be employed to estimate safe dose levels (Crump 2003). For non-threshold compounds, such as genotoxic carcinogens, the TDI or RfD refers to an acceptable risk level, which is usually set at 1/1,000,000. Usually, the lower 95% confidence level is used as a point of departure for extrapolation; extrapolation may be founded on the mode-of-action or be linear (EPA 2005).

During the exposure assessment, exposure levels found or, in the case of not yet marketed chemicals, anticipated to occur in the population are estimated. For this purpose, biomonitoring or exposure modeling may be used. Biomonitoring methods include the measurement of urinary or serum levels in a representative study population. Exposure modeling requires the estimation of released chemical quantities, pathways and transformation or degradation mechanisms (van Leeuwen and Vermeire 2007). In the area of food contact materials (FCMs), exposure models often combine dietary surveys, with packaging market distributions and migration data. A recent model based on this approach is the Flavours, Additives, and food Contact materials Exposure Tool (FACET, Oldring et al. 2013). Waste water treatment plant (WWTP) monitoring has also been suggested as a proxy for human chemical exposure (Venkatesan and Halden 2014) and was previously used to estimate perfluorinated chemical (PFC) exposure (D’eon et al. 2009).

In this final step, the risk assessors integrate the information collected during the previous steps to quantify the actual probability, “the risk,” of a harmful effect occurring in an exposed population (risk quotient, van Leeuwen and Vermeire 2007). Additional information regarding the assumptions and uncertainties involved in the prior steps is included. Risk characterization may distinguish between sex, age, lifestyle, and/or ethnic groups to allow for a more differentiated understanding of a chemical’s risk to cause harm within a population. Risk characterization should adhere to the principles of transparency, clarity, consistency, and reasonableness (TCCR, EPA 2014).

3. Risk assessment agencies in Europe and the U.S.

In Europe, risk assessment is formally separated from risk management. While the European Food Safety Authority (EFSA) is in charge of carrying out the science-based risk assessment of FCMs, the European Commission, in particular the Directorate-General for Consumer Health (DG SANCO), the European Parliament, and the EU Member States are charged with the integration of scientific evaluation of risk with political, economic, social, and environmental considerations (EFSA 2014). In the U.S., the Food and Drug Administration (FDA) carries out both risk assessment and risk management. Both in the U.S. and in Europe, the risk arising from substances not specifically regulated or exempted from regulation must also be assessed independently by manufacturers.