Under European legislation, biocides are defined as “chemicals used to suppress organisms that are harmful to human or animal health, or that cause damage to natural or manufactured materials”. Biocides find broad application in the food and food processing areas. They are commonly used to reduce the number of microorganisms (e.g. bacteria, fungi, algae) in food and on any material coming into contact with the food. During food processing and storage, the chemical eradication of microorganisms serves two main purposes: the prevention of general food spoilage and food-borne illnesses. Biocides applied in or on food contact materials (FCMs) include alcohols, organic acids and their esters, aldehydes, amines, quarternary ammonium compounds (QACs), halogen compounds, ionic silver and nanosilver, oxidizing agents, isothiazolones, phenols and biguanides (Figure 1). Depending on their use they can be grouped into process biocides, surface biocides and food preservatives. Process biocides are used to prevent microbial contamination of FCMs and they also include biocides used during the production of the FCM itself. Surface biocides are incorporated into the FCM with the intent to reduce the number of microorganisms attached to the FCM. These biocides shall not be released from the material. Food preservatives may be incorporated into the FCMs (forming so-called active materials) with the intention to be released into the food or to act on its surface. 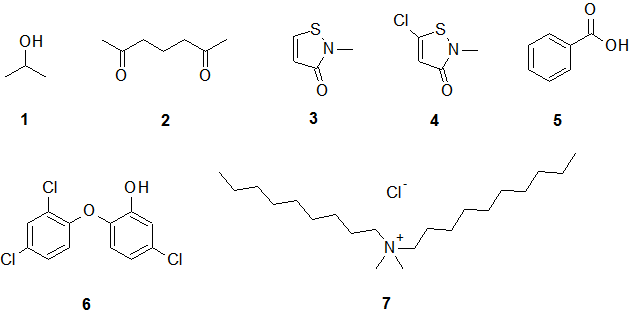 In 2013, Biocide Information Limited estimated the global biocide consumption at nearly US $5.4 billion for active substances and US $12.4 billion at the formulated biocidal product level. In 2012, halogenated compounds covered more than 1/3 of the global biocides market in terms of volume and value, followed by metallic biocides and organic acids [1]. Compound Annual Growth Rates (CAGR) up to 5% were predicted for the next six years by market researchers [1-3].

On September 1, 2013 the Biocidal Product Regulation (BPR, Regulation (EU) No 528/2012) came into effect in the EU and repeals the earlier Biocidal Products Directive (BPD, Directive 98/8/EC). The BPR aims at establishing an EU-wide harmonized “Union” list of approved biocides (active substances) (Annex I of BPR). Biocidal products contain approved active substances and require authorization during a second phase of the regulatory process. The biocidal products are grouped into 22 product types (PT) (e.g. PT4 – food and feed area). Treated articles have come in contact with or contain biocidal products or active substances and require labeling under certain conditions (e.g. when a claim of biocidal properties is made on the product or when the labeling of a specific active substance is legally required). Depending on the type of biocide (process biocide, surface biocide or food preservative), the risk assessment has to be carried out by the European Chemicals Agency (ECHA) or the European Food Safety Agency (EFSA) or by both agencies. No clear process has been defined so far on how to perform a combined risk assessment covering the provisions of Regulation (EC) No 1935/2004 and BPR, but an amendment of the BPR was recently drafted. The development of such a process will require further legal modifications of both above mentioned regulations. Currently, a total of 64 active substances are approved in accordance with the BPR. They do not contain any biocides authorized for food and feed (PT4), but only active substances applied in other product types. For the food and feed area (PT4), 57 active substances are under review and may be authorized in future (as of July 14, 2014). In the U.S., antimicrobial substances used in or on FCMs, which may migrate into the food, are either categorized as pesticide chemicals or as food additives under 21 U.S.C. §321(q),(s). Depending on their application, these substances are regulated by two different authorities. Antimicrobials used in or on food packaging, material preservatives and non-functional antimicrobial components in FCMs are regulated as food additives by the U.S. Food and Drug Administration (FDA) under 21 U.S.C. § 348. Food contact substances with an antimicrobial effect in or on permanent or semi-permanent food-contact surfaces are regulated as pesticide chemicals by the U.S. Environmental Protection Agency (EPA) under 21 U.S.C. § 346a.

Migration of biocides from FCMs may occur non-intentionally resulting in the contamination of food [4-6]. Active packaging materials are designed to allow migration of biocides from the packaging onto the food’s surface or into the food. This deliberate migration intends to protect the food from spoilage caused by microorganisms. For such applications, specific migration limits are especially important. Data on biocide exposure via the food chain are difficult to obtain, while dermal exposure, inhalation and accidental oral exposure have been considered as main exposure routes for biocides so far [7].

Many biocides used to disinfect surfaces are irritants and sensitizers acting on the skin, eyes and mucous membranes. They can lead to e.g. allergic contact dermatitis [8, 9] and asthma [10]. Especially occupational users of biocides might also be at risk of accidents as a severe incident with chlorine gas in a poultry farm exemplarily demonstrated [11].

Resistance against biocides and antibiotics

The development of resistances against biocides causes concern, because the inactivation of the biocide usually results in unexpected and hard to manage microbial contamination. One reason for the occurrence of resistant microbial strains is the frequent application of biocides at concentrations that are too low to kill all microorganisms. The surviving organisms might have intrinsic resistance mechanisms (including efflux pumps that transport the biocide out of the cell or reduced membrane permeability due to slime layers, thick outer membranes or complex cell walls). At sub-inhibitory concentrations of biocides, these properties might then easily be transferred by horizontal gene transfer to other cells [12]. Bacteria developing resistance against one specific biocide often acquire resistance to other biocidal agents at the same time [13]. These acquired resistances do not only concern different classes of biocides, but also combined resistances between biocides and antibiotics were observed frequently [14]. Again, the application of biocides at sub-inhibitory concentrations may also cause the development of bacteria that are additionally resistant to antibiotics. In contrast to industrially used biocides, antibiotics form a subgroup of pharmaceutically important biocides used in the medical treatment of bacterial infections. Food production sites were identified by SCENIHR as one critical place promoting the development of bacteria resistant to both antibiotics and biocides [15]. This trend was judged to pose a significant risk to public health [14, 16].