In October 2016, the European Parliament adopted a resolution on the implementation of the Food Contact Materials Regulation EC 1935/2004. A wide variety of issues is addressed to better protect public health and support functioning of the internal market.

On October 6, 2016 the European Parliament (EP) voted with a large majority of almost 90% in favor of a new resolution on the implementation of the Food Contact Materials Regulation EC 1935/2004 (FPF reported). One year before, the EP’s Committee on Environment, Public Health and Food Safety (ENVI) had initiated the report and announced Christel Schaldemose, Danish Member of the EP, as rapporteur.

The report considers the outcome of a workshop on “Food contact materials – how to ensure food safety and technological innovation in the future?” (FPF reported) and a survey assessing the implementation of the legislation on food contact materials (FCMs) with participants from the European Commission (EC), European Food Safety Authority (EFSA), 28 national competent authorities and further stakeholders (FPF reported).

Conclusions from the report highlight that “the current paradigm for evaluation of safety of FCMs is insufficient”. Further, the report addresses the issue of fragmented regulation on non-plastics FCMs in Europe, where EU-wide, “harmonized” regulations are missing, stating that “harmonisation of food contact materials and articles can help to bring about a uniformly high level of public health protection” and “that the lack of uniform measures is detrimental … to the smooth functioning of the internal market.”

Here we provide a short summary of the report and list the key events that led to its adoption by the EP.

Implementation of the European legislation on FCMs: successes and gaps

The EP acknowledges the FCM Framework Regulation EC 1935/2004 as a solid legal basis. However, the lack of specific regulations for 13 out of 17 groups of FCMs, as well as shortcomings in the implementation and enforcement of the legislation in place are emphasized. The EP calls on the EC to consider the European Implementation Assessment, national measures and JRC’s upcoming review of national provisions before drawing up new specific measures. Correspondingly, the EP recommends a prioritization of specific EU measures for paper and board, varnishes and coatings, metals and alloys, printing inks and adhesives. Recycling was identified as another sensitive issue, because it may introduce contaminants, e.g. leading to the migration of mineral oils from paper and board into FCMs. Therefore, issuing of specific, EU-wide measures for recycled paper and board are recommended.

In Europe, risk assessment for chemicals used in FCMs is performed by the European Food Safety Authority (EFSA), while the EC is responsible for risk management (i.e. authorization of substances for use in FCMs). In their report, the EP welcomes the intention of EFSA to focus not only on the risk assessment of starting substances (i.e. chemicals used in the manufacture of FCMs), but to also include chemicals present in final FCMs and food contact articles, the manufacturing processes, and non-intentionally added substances (NIAS). More specifically, the EP calls on the EC to review the concept of functional barriers, the commonly used 10 ppb threshold, and the assumption that molecules weighing over 1000 Da are not absorbed in the body (and therefore are usually not subject to chemical risk assessment, even if they migrate from FCMs into food). Mixture toxicity, cumulative and concurrent exposures, interaction between chemicals, low-dose effects and non-monotonic dose-response relationships are further issues to be considered in future legislations. Certain substance groups shall be especially covered during risk assessment of FCMs, e.g. bisphenols, phthalates, perfluorinated substances, lead and cadmium, and nanomaterials. Bisphenol A (BPA) shall be banned in all FCMs, but not substituted by chemically related structures such as bisphenol S (BPS).

The EP report states that the criteria for endocrine disrupting chemicals (EDCs), which are currently under discussion at the EC, shall also apply for FCMs. Harmonization between the FCM legislation and REACH is also called for, especially regarding gaps in the safety assessment and the treatment of Substances of Very High Concern (SVHC). The EP recognizes that these demands will cause higher costs. Hence, the funding for EFSA shall be increased. Additionally, EFSA and the European Chemicals Agency (ECHA) shall intensify their cooperation to efficiently use their resources.

Traceability of FCMs within the supply chain

A Declaration of Compliance (DoCs) states that an FCM complies with legislation. Currently, DoCs are mandatory for plastic FCMs within the EU. In some Member States, DoCs are obligatory for all FCMs (e.g. Denmark). The EP recommends that all types of FCMs, whether manufactured in the EU or imported, shall be accompanied by a DoC and further supporting documentation. Such documentation shall also be available for enforcement purposes, upon request.

Compliance, enforcement and controls of FCMs

Harmonized legislations and EU guidelines for FCMs, data sharing and an improved early warning system shall lead to a high level of public health protection, the report states. Uniform analytical standards and methods, an obligation to register all FCM-producing companies, and systematic, frequent and efficient official controls shall further help to reach this aim.

The report closes with an instruction to the President to forward it to the Council, the EC and the governments and parliaments of the Member State.

On November 12, 2015 MEPs, their aides and external guests attended a seminar on “Chemicals in food packaging materials: Is the regulation of chemicals in food contact materials sufficient?” (FPF reported). The event was co-organized by Christel Schaldemose and the Danish Consumer Council THINK Chemicals.

The ENVI committee further invited to a workshop on “Food contact materials – how to ensure food safety and technological innovation in the future?” which took place at the EP on January 26, 2016 (FPF reported). Stakeholders from authorities, academic research, industry and NGOs presented and discussed topics related to the regulatory situation of FCMs in Europe. They detailed the current situation and covered issues related to enforcement, risk assessment, research and innovation.

On April 26, 2016 the ENVI committee published the draft report on the implementation of the Food Contact Materials Regulation (Regulation (EC) No 1935/2004) (PE575.317), which included the motion for an EP Resolution and an explanatory statement (FPF reported).

In May 2016, an implementation assessment study on food contact materials’ regulation 1935/2004 was published by the EP’s Directorate-General for Parliamentary Research Services (EPRS) (FPF reported). For the purpose of this study, EPRS queried several different stakeholders; a conclusion of this effort was the finding, that the absence of EU-wide, harmonised regulations for all FCMs is perceived as deficiency by all stakeholders. 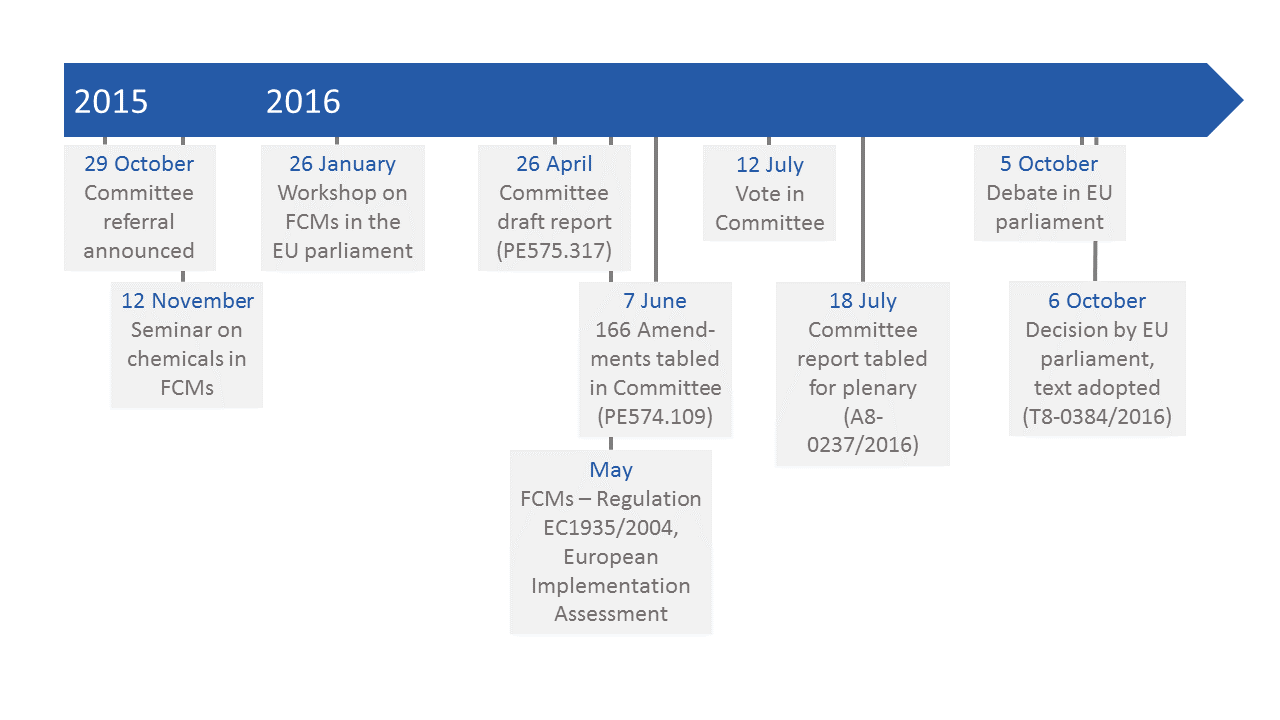 In a next step, it is expected that the EC will respond directly to the EP concerning the issues raised in the report.