Are threshold concepts safe alternatives for the risk assessment of food contact materials? The Threshold of Toxicological Concern (TTC) and the Threshold of Regulation (TOR) are risk assessment tools assigning human exposure thresholds to substances with known chemical structure, but unknown toxicity. The Food Packaging Forum reviews advantages and challenges of threshold concepts.

Advancing analytical techniques continue to alert us of the presence of an increasing number of unsuspected substances in food contact materials. These chemicals include unwanted reaction products, impurities, metabolites and/or breakdown products. Further, there is a large quantity of known, but previously not assessed food contact substances. The evaluation of these substances requires extensive toxicological data, thereby posing an experimental and financial challenge. In order to resolve this challenge, efforts have been invested over the past 30 years into developing threshold concepts. Threshold concepts are based on the assumption that it is possible to derive exposure threshold values below which there is a very low probability of adverse health effects. They judge a chemical’s toxicity based on toxicity data of structurally related chemicals. While knowledge of chemical structure and exposure data is indispensable to apply the threshold concept, it can be used to assign risks to substances in the absence of appropriate toxicological data.

The present report revisits the U.S. Threshold of Regulation (TOR) rule as a first legally applied example of threshold concepts. Further, it details how the Threshold of Toxicological Concern (TTC) was developed to assess and prioritize previously unknown or not evaluated substances. Finally, some of the pressing issues are revisited, thereby illuminating the need for further research and discussion.

In the U.S., the Food and Drug Administration (FDA) introduced the Threshold of Regulation (TOR) concept for indirect food additives in 1995 (21 C.F.R. §170.39). Based on the de minimis principle, this rule exempts substances migrating from packaging into food at levels below a threshold of 0.5 ppb from being listed as food additives. Assuming a daily food intake of 1.5 kg liquid and 1.5 kg solid foods, the dietary exposure level for compounds exempted from regulation by the TOR was set at <1.5 µg/person/day. Carcinogenic compounds or suspected carcinogens are excluded from the exemption of regulation under the TOR rule, because carcinogenicity is considered the most sensitive toxicological endpoint. To calculate the threshold value of 0.5 ppb, the carcinogenic potencies of several hundred chemicals orally tested in rodents were linearly extrapolated to concentrations representing a socially acceptable risk of one in a million for tumor development in humans. Thus, the concept is based on a probabilistic approach and intends to protect against untested, potentially carcinogenic chemicals [1].

Shortly after the U.S. introduced the TOR, a group of industry scientists and consultants published another threshold concept, the TTC approach [2]. Rather than setting a single threshold, the TTC further differentiates between chemical structures and presents tiered thresholds for substances with varying levels of toxicological concern (Table 1). In 1978, Cramer et al. developed a decision tree which assigns chemicals to the Cramer classes I-III based on their estimated toxicological concern [3]. In 1996, Munro and colleagues classified 613 non-carcinogenic chemicals in the Cramer classes by applying this decision tree [2]. Based on the existing toxicological data of these chemicals they then set specific thresholds for the three Cramer classes (Table 1). Munro et al. stated that genotoxic carcinogenic substances should not be evaluated using the TTC approach. In 2000, Kroes and colleagues confirmed that carcinogenicity was the most sensitive endpoint and that the general threshold of 1.5 µg/person/day protects sufficiently against cancer [4]. In accordance with an expert workshop convened by the International Life Sciences Institute (ILSI) Europe in 2003, two new threshold levels were introduced by Kroes et al. [5]. They set an exposure threshold at 0.15 µg/person/day for genotoxic carcinogens by applying linear extrapolation to low 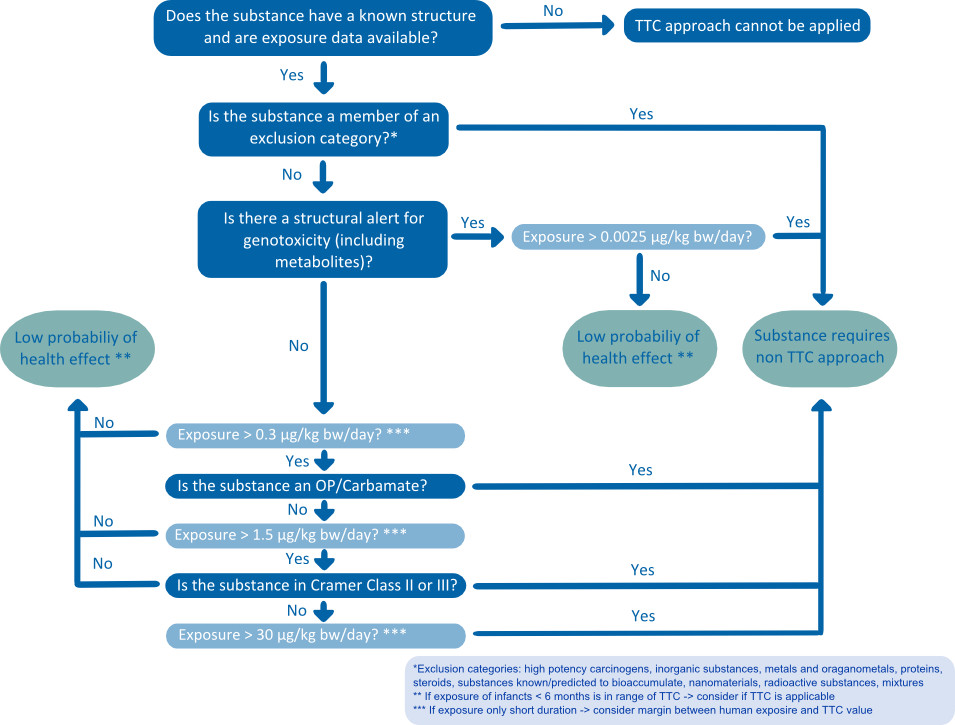 doses thereby allowing the evaluation of genotoxicants under the TTC concept. This threshold only excluded a few groups of highly potent genotoxic as well as non-genotoxic carcinogens [5].  Furthermore, a lower threshold was assigned to certain neurotoxicants and pesticides (organophosphates and carbamates), because the researchers concluded that neurotoxicity was not sufficiently covered by the threshold for Cramer class III compounds. In 2012, the European Food Safety Authority (EFSA) published a scientific opinion stating “that the TTC approach can be recommended as a useful screening tool either for priority setting or for deciding whether exposure to a substance is so low that the probability of adverse health effects is low and that no further data are necessary” [6]. Mainly, EFSA’s work embraces Kroes’ decision tree [4], but several minor and major improvements were demanded (Figure 1). This includes the removal of Cramer class II, revision and refinement of the Cramer decision tree based on current toxicological data and the evaluation of carcinogens by the Margin of Exposure approach instead of linear extrapolation to low doses.

*Thresholds were calculated based on cumulative distribution curves of NOELs from animal experiments for each structural class. The 5th percentile NOELs were converted into a human exposure threshold by applying a safety factor of 100 and assuming a standard person weight of 60 kg.
**Thresholds for carcinogens were derived from linear extrapolation of TD50 values from animal experiments to the risk of one in a million for tumor development in humans.

3. Current and future applications of the TTC

EFSA’s scientific opinion on the TTC discussed the application of the concept to food contact substances, flavorings, enzymes and processing aids. Low level migrants, impurities and side-products were also deemed suitable substances for an evaluation with the TTC. It is not clear whether such evaluations would preempt any further toxicity data, if substances were found to be below the thresholds, or merely serve for efficient risk assessment prioritization. So far the TTC concept was only adopted for the regulation of flavoring substances by the European Commission (EC) [7] and the Joint FAO/WHO Expert Committee on Food Additives (JECFA) [8]. Application of the TTC for FCMs remains under debate. In 2011, Koster et al. proposed a TTC approach for the regulation of unknown substances found in food samples including non-intentionally added substances (NIAS), but the confident identification of NIAS and, particularly, genotoxic substances remains an unresolved issue [9]. In 2012, the EFSA Panel on Plant Protection Products (PPR) adopted a scientific opinion recommending the TTC approach for metabolites and degradation products of pesticides [10]. Regarding consumer products, proposals have been made to waive toxicity tests under REACH based on exposure assessments and the TTC.

The pending application of the TTC concept for the evaluation of previously non-assessed food contact substances requires a thorough evaluation of the scientific rigorousness and adequacy of the concept. Six questions of importance have been singled out.