Per- and polyfluoroalkyl substances (PFASs)

While few perfluorinated compounds have been phased out due to health concerns, other per- and polyfluoroalkyl (PFASs) compounds continue to be used for food contact materials. The Food Packaging Forum summarizes chemistry, applications, health concerns, and regulation of PFASs.

The use of per- and polyfluoroalkyl substances (PFASs) as grease and stain repellents in consumer products started in the 1950 [1]. Common properties of PFASs include thermal and chemical stability as well as high water and oil repellency [2]. These characteristics make PFASs especially suitable for the use in a variety of food contact materials (FCMs). However, PFASs are highly stable against degradation in biota and the environment [3]. The high persistence and extensive application contribute to the ubiquitous presence of PFASs.

Two industrially important PFASs are perfluorooctane sulfonic acid (PFOS) and perfluorooctanoic acid (PFOA) (Figure 1). Over decades, PFOS, PFOA and their derivatives have been widely applied, but their general persistence, low elimination rates in humans and associated adverse health effects led to different initiatives aiming at their phase-out. Nevertheless, PFASs with shorter fluorinated side chains and other types of fluorinated substances are currently used as substitutes for PFOS and PFOA [4, 5]. Short-chain PFASs have faster elimination rates in humans than their long-chain homologues, but recent research indicated that they are similarly persistent and toxic compared to their long-chain homologues [6].

The variety of organic fluorine molecules is diverse and thousands of different PFASs have been synthesized in the last decades [7, 8]. Chemical bonds between carbon and fluorine atoms are very strong leading to high thermal stability, chemical resistance and general persistence of such molecules.

Perfluoroalkyl and polyfluoroalkyl substances (PFASs) are aliphatic substances containing, as a minimum requirement, one terminal carbon atom on which all hydrogen substituents have been replaced by fluorine atoms. Perfluorinated substances are molecules in which all hydrogen atoms bound to a carbon chain are replaced by fluorine, but functional groups in the same molecule may contain hydrogen atoms.  In contrast, polyfluorinated substances are highly fluorinated, but the backbone still contains (partially) hydrogenated carbon atoms. 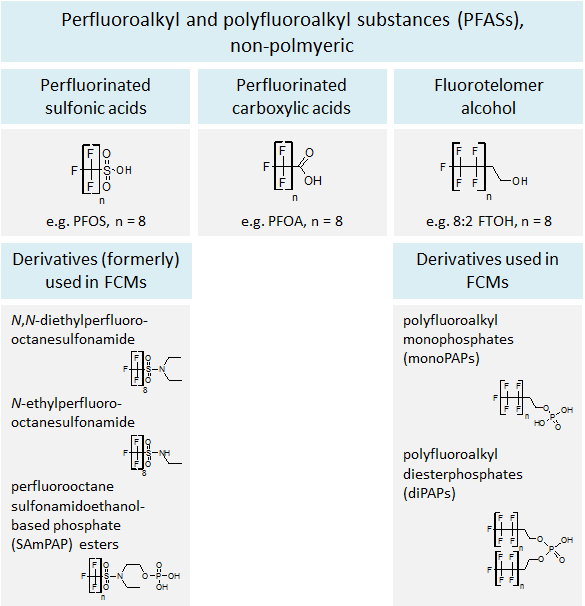 PFASs increase the non-stick properties of materials, as well as the repellency of oil, grease and water[4, 9]. Popcorn bags, fast food wrappers, pizza boxes, and other types of packaging that need to be oil-repellent and/or heat resistant are often coated with PFASs and represent a typical field of application. Some long-chain PFASs, e.g. PFOS, its precursors and PFOA, have been targeted by different phase-out initiatives within the last years [12-14]. As a consequence, the use of some PFOS derivatives (e.g. perfluorooctane sulfonamidoethanol-based phosphate (SAmPAP) esters) in paper and board FCMs has mainly stopped by 2002 [15]. In the recent years, fluorotelomer-based derivatives (e.g. polyfluoroalkyl phosphate esters (PAPs)), short- and medium-chain PFASs and fluorinated polymers have gradually started to replace many PFOS-based substances in FCMs [4, 9, 10].

Fluorinated polymers are commonly used as coating for pans and other kitchen utensils. In particular, PTFE-coated kitchenware can be found in many households worldwide. During the production of PTFE, PFASs are added as emulsifiers, which remain in the polymer after production, but can be removed by sintering the material before use.

Several attempts were undertaken by authorities and industry to restrict the production and use of PFOS, PFOA and its precursors [12-14]. Between 2000 and 2002, chemical company 3M, the main producer of PFOA, PFOS and PFOS-related products, has completely phased-out these chemicals [16]. In 2006, the 2010/2015 PFOA Stewardship Program was initiated by the U.S. Environmental Protection Agency (U.S. EPA) and eight major PFAS manufacturers aiming at a strong reduction of PFOA emissions and use [12]. In 2009, PFOS and its derivatives were listed as persistent organic pollutants  (POPs) under the Stockholm Convention [13].

In Europe, the ammonium salt of PFOA (APFO, CAS 3825-26-1) is authorized for the use in plastic FCMs intended for repeated use, which have to be sintered at high temperatures (Plastics Regulation EC 10/2011), but PFOS is not authorized under this regulation. In total, eight monomers and nine additives containing organically bound fluorine were identified on Annex I of the Plastics Regulation. The monomers (e.g. tetrafluroethylene (CAS 116-14-3) and hexafluoropropylene (CAS 116-15-4)) are mainly used for the production of perfluorinated polymers such as PTFE and fluoroethylenpropylen. The use of 14 of these substances is either restricted by a specific migration limit and/or by further specifications. In the EU, no harmonized legislations exist for most non-plastic FCMs, including paper and board. As a consequence, PFASs used in or on the surface of these materials are often not regulated and many of the substances have never been risk assessed by a public authority. Nonetheless, they share the persistence of PFOA and PFOS or may be degraded to substances with a similar persistence.

In the U.S., PFOA and PFOS are not listed in the U.S. FDA database of indirect food additives. However, this database lists 50 and 15 substances containing the search terms “fluor” and “perfluor”, respectively. They are regulated to be used in e.g. perfluorocarbon resins, paper and paperboard, components of resinous and polymeric coatings, and processing aids for polyolefins. In 2016, three long-chain PFASs that were previously regulated as indirect food additives were banned by the U.S. Food and Drug Administration (U.S. FDA) [17].

PFASs are generally quantified in >95% of human samples all over the world, but they are also measured in almost all animal species and environmental samples [3, 18]. PFOA, PFOS and perfluorohexasulfonic acid (PFHxS) are the most abundant PFASs in humans [19]. Food, drinking water, indoor air and dust are major exposure sources of PFAS [18, 20] and FCMs contribute to the contamination of food [9, 21-23].

For the general population, exposure estimates for single PFASs are in the range of ng per kg body weight per day [3, 18, 24]. In contrast, PFASs manufacturing workers exceeded such exposure values by several orders of magnitude and elevated exposure levels were also reported for populations living in communities with PFASs-contaminated drinking water [25].

In recent years, the health effects of PFOA and PFOS have thoroughly been investigated [26-31]. These chemicals are not only highly persistent and slowly eliminated from the human body, but they both cause various adverse health effects. Furthermore, their chemical derivatives may be degraded to PFOA and PFOS leading to even higher exposure levels.

Many fluorinated alternatives exist for PFOA and PFOS and are increasingly applied after efforts were undertaken to phase-out PFOA and PFOS. However, the toxicity of the substances used as substitutes is often not known [32].

Animal experiments showed that PFOA is hepatotoxic: It increases the liver weight, levels of cholesterol and liver enzymes, peroxisome proliferation and the histopathology [26, 27]. Further, it induces liver tumors, Leydig cell tumors, and pancreatic acinar cell hyperplasia. PFOA may reduce fecundity and fetal growth, increase neonatal mortality, affect the mammary gland development, and interfere with the immune system [29]. In 2011 and 2012, a panel of epidemiologists who were assigned after a court decision of a class-action lawsuit against DuPont (“C8-Panel”) concluded that PFOA is probably linked to kidney cancer, testicular cancer, ulcerative colitis, thyroid disease, hypercholesterolemia, and pregnancy-induced hypertension [33, 34]. A systematic review on the toxicity of PFOA concluded that PFOA is known to be toxic to human reproduction and development [35].